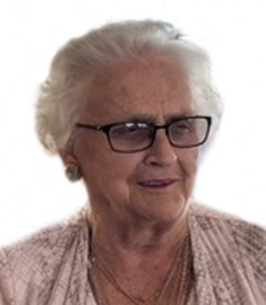 Olive Myrtle (Williamson) Mock of Harriston, passed away peacefully at Royal Terrace, Palmerston, on Sunday, September 4, 2022 in her 89th year.

Beloved wife of the late Jim Mock (2007). Mother of Bonnie Foerster of Clifford, Dan and Jane Mock of Owen Sound, Cathy and Rob Pultz of Fordwich, Carol and Steve Weltz of Mildmay and John and Patty Mock of Harriston. Predeceased by son-in-law Jeff Hill (1997).

Olive will also be greatly missed by the caring staff at Royal Terrace LTC, Palmerston who quickly became close friends while providing care above and beyond what a family could hope for.

Along with being busy raising a large family, Olive also worked outside the home most of her adult life. In early years she was a Bell Canada Operator, worked several years at Don’s Grill, and found her real love enjoying retail at Harriston Home Hardware for many years. The last several years were extra special as family members John and Patty Mock purchased the business and she worked alongside them and their boys.

An annual event was always spending a great deal of time in the kitchen of the Harriston Arena feeding young hockey players during the large Bantam hockey tournament. She was a great supporter of Harriston Minor Hockey.

After her family was raised Olive became very active with the Harriston Legion where she was a President of the Ladies Auxiliary and spent many hours helping with catering, special events, and forever given the title of head gravy maker.

A private family service will be held at the Hardy-Lee Funeral Home, Harriston on Thursday, September 8th at 1:30 p.m.

The service will be live-streamed. Click here to view service.

All rights reserved. This obituary is also archived at obittree.com